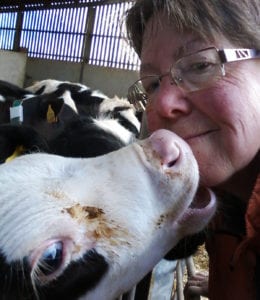 I hope all y’all can feel the big hug I’m sending across the pond to the great folks in the Diocese of East Tennessee!! Maybe it was a slow news story day, but I was invited to send an update on my life across the pond – the life of a rural vicar in the wilds of North Devon where most other folks in the county of Devon believe the inhabitants of my beloved new home are “wild, hairy savages”! Those of us who live here, quite honestly, like that just fine! It keeps some of the “townies” from coming to settle and to disrupt our rural way of life. More on that later – be prepared for an image of the vicar standing in the middle of the road shouting at thoughtless drivers.

I’m currently a team vicar in a team of nine very rural, very small Anglican parishes. One of our suffragan bishops calls where most of my parishes are the “empty triangle.” I think he likes to tease me, because (surprise, surprise) I always react – but he means that we are in one of the most rural, agricultural areas of the country. But it’s also one of the most beautiful. Picture rolling hills, some moorland (high and lots of scrub vegetation), intense greens and gorgeous flowers because of our incessant rain, loads of animals in the fields, and amazing skies. I think rainbows are born here because as a peninsula we have lots of water that makes for incredible cloud formations and stunning rainbows. Remember – LOTS of rain – just saying!

We have a good team – a full time rector, me, the part time vicar, three lay readers and wonderfully committed lay folks. Not all teams are as lucky. One of my colleagues has 11 parishes with not as large a supporting team. Most of our rural churches are now part of a team and as the number of clergy is being lessened due mostly to financial constraints, the bigger the teams will get. I’m trying to put my experience from seminary teaching and consulting in rural small churches over there into use here. I’m on a rural church committee which is beginning to explore some new models of ministry (close to my heart). We have a cool website, worth a look: http://devonchurchesruralforum.org.uk. And when I say small church, I mean small! Often a Sunday congregation can be anywhere from 1 to 18. Most of my nine congregations have an ASA of seven. But even if it’s me, the organist, and one stalwart member warming a pew, we give it the whole nine yards … hymns, reading, sermon, and some laughs!! Well, warming a pew is also a joke – there is NOTHING as cold as an English church – nothing! I wear fingerless gloves and hardy lined boots in winter! Maintaining listed Medieval churches is a struggle, doing outreach is a struggle, fundraising is a struggle – but the wonders and beauties of ministering among rural people who are close to the land and natural pastoral care givers is worth every minute of worry about the material things.

My other work, as many of you know, is “doing what my folks do.” My former seminary students will (I hope) remember me saying that as rural clergy often must be bi-vocational, the best thing is to do what your folks do. I’m living proof of the fact that it gets you instant credibility with your folks and very quick adoption into the tribe! When I first arrived in 2011, I got a job harvesting organic vegetables. Oh … my … sweet … Lord! I thought I’d worked hard before, but hours of up and down bending to wrestle with Mother Earth to get onions out of the round, hours of pulling potatoes out of the very cold fields in November, and (my finest moments) hours of being able to cut and bin 400 heads of cabbage an hour (I am not making that up!!!) knocked off 50 pounds and gave me an even greater respect for field workers – and myself! hahaha! Eventually, I took a job milking cows as I missed working with big animals. When your folks see you more often covered in cow poop than they do in a collar, you become “one of us” real fast and as vicar, you rarely have to buy your own pint in the pub!

I’ve been milking for seven years here and have become part of the lore! My Brit pals can’t imagine that I prefer cold weather to hot and it’s part of why I love it here. Totally garbage weather much of the time, but there’s nothing we can’t do as long as we have the proper waterproofs and wellies on! I’ve watched families out on the beach playing cricket on a cold winter day all suited and booted up! We’re tough if nothing else! In the summer then, I have my own unique milking outfit – wellies and knee socks, shorts, and a bathing suit top. Yeah, got that image now? I may have lost 50 pounds, but I’m still not skinny and the outfit, after several hours in the milking parlour pit, is covered (as am I) in cow poop!! Now, just in case you wondered … yep, I’ve had cows aim their “emissions” right at my face … down my throat … no amount of spitting will get it out! I’m not dead yet, so swallowing poop won’t give you immediate e coli. However, it’s not nice! hahaha! What is nice, though, is being able to take home fresh milk right out of the tank. No, not pasteurised or anything, just right out of the cow. It’s wonderful!!!

The dairy I work in has fields on two sides of our lane so I’m often found standing in the middle of the road shouting at “my girls” to “get up” across the road. Cars and trucks just have to stop and wait. Just so you know … don’t ever try to push your way through a herd of cows. They delight in seeing what damage they can do to wing mirrors and if they panic it could be severely dangerous to you in the car and the poor milker who will probably be smashed. Every so often a “townie” will make the mistake of hollering at me about the poop in the road or about holding him/her up. I happily shout back, “You live in a place where we farm as our livelihood. If it bothers you, move back to the city.” Brits are most often polite and reserved, so my folks love it that this mouthy American sticks up for them out loud!

I’ve learned a lot here. Things like: never turn your back on a bull; if a bull is well, “bullying” you, smack it on the nose with your plastic stick! HAHAHA … that is my favourite. Mike, the farmer, told me always to bring a stick to the field when I go to bring in the girls because he runs 3-4 bulls with them. Sometimes a bull will “turn” – get nasty – and will see you as a threat. I’ve been chased, pushed, growled at and it can be scary. “Just smack him on the nose,” says Mike. “Um, 1/2 a ton of hamburger on the hoof and me with a plastic stick, I don’t think so,” says Susanna! Recently, a farmer over in Sussex was killed by a bull – happens more than you’d like to think. What an obituary for a vicar, thinks me!

I could go on and on with cow stories! Maybe for another time if I’m permitted! My other claim to fame here is performing in village pantomimes. These are a peculiarly Brit thing – you take a fairy tale usually, although you can use almost anything, rewrite it to an even sillier level including as much “taking the Mickey” as we say, out of local folks and other community groups as you can. There’s always lots of audience participation, throwing candy, singing, and pulling people out of the audience to dance with you in the aisle. You can go to a professional production or many villages do their own which, I think, are more hilarious. I’ve been in 4 now: Scrooge in well, yeah, Scrooge; the fairy godmother in Cinderella; Lady Cora (because I have the best American accent hahaha) in Down-Town Abbey; and the evil witch in Sleeping Beauty. Do you see a pattern emerging here? Yep, this year I’ll be the evil stepmother in Snow White and the Dwarf. Right, we don’t have enough folks to have 7 dwarfs … that’s what you do with pantos. Yes, there are pictures, but it might frighten the bishop!!

I do miss you all and enjoy keeping up with diocesan goings-on via the website and other messages. If any of you are over here, you’re welcome to visit. I give a pretty good tour of Devon and Cornwall. Hey, Bishop Brian, will this do as my Ember Day letter for this term? Sending love and prayers to you all!!