Back from Lambeth: A Conversation with Bishop Brian Cole 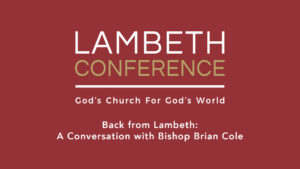 Come hear Bishop Brian Cole in conversation about his time at the Lambeth Conference. This once-in-a-decade meeting is a rare opportunity for bishops in the Anglican Communion from across the globe to come together and enter into deep conversation with each other. You’ll have a chance to hear about Bishop Brian’s experiences and what inspiration and impact Lambeth may have for East Tennessee. Join us on Thursday, August 18th beginning at 6:30 pm on Zoom.

“The deepest level of communication is not communication, but communion. It is wordless. It is beyond words. It is beyond speech. It is beyond concept. Not that we discover a new unity, but we discover an old unity. My dear brothers and sisters, we are already one. But we imagine we are not. And what we have to recover is our original unity. What we have to be, is what we are. “
—Thomas Merton, from The Asian Journal
As Susan and I head home from The Lambeth Conference, I’m reflecting again on Merton’s wisdom on communication and communion. Lambeth was filled to overflow with communication, in formal and informal settings, at dinner tables and in Bible study groups. And great pains were taken to translate from multiple languages, so that a common understanding might occur.
To be honest, truly understanding each other also meant understanding we have real differences which strain our unity. Yet, one of the true gifts of this Lambeth were the several moments when we communicated our differences to each other, while also promising to maintain the strongest ties possible, for now, to remain in communion with each other.
This Conference concluded with Archbishop Welby reminding us what is needed now is bishops who love God and who love people. It is God, and God’s saving work that already makes us one, despite our limited and imperfect efforts to live that out. May, in the days ahead, we become more of what we truly are. May we become more like God’s love which already resides in us.
Peace,
+Brian

“The Church exists primarily for the sake of those who are still outside it. It is a mistake to suppose that God is only, or even chiefly, concerned with religion.”

Susan and I are attending the 15th Lambeth Conference, which is a decennial meeting of bishops from around the Anglican Communion. A separate program for spouses is also offered. The theme for this gathering is God’s Church for God’s World. In other words, our common life as Christians can not be satisfied with being Good News for us, a pious few. The Good News we have encountered is for the World, God’s entire creation.

Our days here in conference are shaped with a study of First Peter, common prayer, and hearing of stories from our particular contexts. By encountering those other bishops and spouses who have shown up here, we are met with The Holy Spirit, which has already moved our Conference into a new place. We are saying out loud that there are places of real disagreement (regarding human dignity and human sexuality) while also saying we need to stay together, particularly if we hope to be proclaimers of Good News for the World.

Yesterday, Wednesday August 2nd, we traveled to Lambeth Palace, which has been the home of Archbishops of Canterbury for centuries. It is in the heart of London. In the heart of London, it contains an enormous garden. This summer, excessive heat, exacerbated by climate change, has turned the lawn crispy and brown. No matter the brightness the color of flowers before us, they all wore coats of dust.

It was from that setting, however, that we prayed and pledged to launch a Communion Forest project. From the rear gardens of a home where Archbishop Temple once lived, who famously reminded us that the Church primarily exists for those outside it, while baking in the English noonday sun, we committed ourselves to show up as advocates for creation. It felt a little silly. It also felt hopeful. But what of all the things we never do because they appear silly?

At the end of the Prayer Walk at Lambeth Gardens, we were invited to pray a prayer written by Bishop Guli Francis-Dehqani, Chelmsford, UK. Bishop Francis-Dehqani is an Iranian-born British Anglican. Her father and grandfather both served as Bishops in Iran. During the Iranian Revolution, her older brother was killed and the family was forced to flee. Here is the prayer she wrote—
“Lord of all, as we thank you for the family of the Anglican Communion, we pray that in our wonderful diversity we may each know ourselves created in your image and loved by you. Inspire us to work together to hasten the day when people will come from north and south, east and west, to find their honored and equal place at your table and their home in your kingdom. Through Jesus Christ our Lord, Amen.”

Pray for me as I pray for you.

A Reflection from Wednesday of Lambeth Conference – Wednesday, August 3, 2022 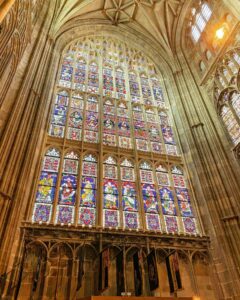 The Great South Window of the South-West Transept at Canterbury Cathedral.
I took this photo before Sunday morning’s opening service for the Lambeth Conference. Several late 12th-century stained glass panels are included. Sunday’s Eucharist, like the entire conference, took us back in time and brought us here again to now. I was seated in the quire, right next to the traditional Cathedral choir. From my spot, however, I also danced (a little, awkwardly), as the Zinafa choir, with drum, dance, and voices praising, led us in the Gospel alleluia.

From my seat, I could see Archbishop Justin Welby, as he sat in the chair of St Augustine, the ceremonial seat for all of Anglicanism. The actual seat dates to the early 1200s. At the same time, I could hear the voice of the Right Rev. Dr. Vicentia Kgabe, Bishop of Lesotho, as she was the first female preacher to address an opening service at the Lambeth Conference.

On and on, for our whole time here, we have passed through history, while also walking up to the edge of now, with the Holy Spirit reminding us again and again, “There’s more and more and more.” This time here is not intended for legislation, though some would like for us to function in this way. As a newcomer to Lambeth, and as one who is still trying to take it all in, realizing this conference does not give up its meaning easily (that is either the genius of it or its frustrating flaw), I believe we are meant to be here, to show up, to pray and listen, to recognize how all episcopal ministry is locally adapted, while also rooted in something ancient and common. My prayer is that the root is Jesus Christ.

“As Bishops, we remain committed to listening and walking together to the maximum possible degree, despite our deep disagreement on these issues.” That sentence is from the Call on Human Dignity. That Call acknowledged that the Anglican Communion holds a variety of views on how human dignity relates to human sexuality. For me, that statement of fact roots us in the early days of Anglicanism, while also acknowledging the Spirit of God moves among us now, helping us confess that God has made clean what we once considered unclean.
We are all being healed.
Bishop Brian Cole

Episcopal Church Presiding Bishop Michael Curry is among an estimated 650 Anglican bishops worldwide—including more than 100 Episcopal bishops—attending the Lambeth Conference in Canterbury, England, through Aug. 7. He shared a video message after bishops discussed the Lambeth Call on Human Dignity on Aug. 2. Read all Lambeth Calls.

Read the transcript of the presiding bishop’s message.

Photos taken from Lambeth Conference have been offered license free for editorial use by The Lambeth Conference with permission to publish on all platforms. Other photos were taken by Bishop Brian Cole, Susan Parker Weatherford and affiliated Episcopal agents.