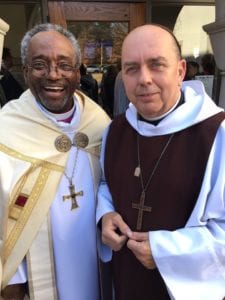 At my age, the priesthood and diaconate were not in my future. At that time we had two brothers at St. Paul’s in Chattanooga that were in the Brotherhood of St. Gregory (BSG). This is a large order of Friars in The Episcopal Church. I began to ask questions of them and I had a dream that this was what God has called me to do.

I then began as an aspirant. I had many conversations with my rector Fr. Donald Fishburne and Mtr. Suzanne Smitherman, also with Brother Ron Fender BSG and Brother Bo Armstrong BSG, as I discerned my vocation.

I applied and was accepted as a postulant in 2010. During the year, it was a time of exploration and discovery. In 2011, I was advanced to novice.

Thus began a two-year course of more study and exploration. After two years, I made my first vows in the Brotherhood in 2013. I remained in annual vows for five years.

This summer (2019), I will make my Solemn Life Profession in the Brotherhood. At this time, I will l vow before our Minister General, Bishop visitor, and all the Brothers assembled to follow the Rule of the Brotherhood of St. Gregory for the remainder of my natural life!

At the current time, I serve St. Paul’s in Chattanooga as head verger. I have a ministry to serve victims of violent crime. I have served on the vestry and I currently work for Ruby Falls. I am a cradle Episcopalian from Washington D.C. and have lived in Chattanooga 40 years.

Please pray for me as I take this Holy Vow.

Brother Larry Walter Reich took his Life Profession vows on July 6.
He is pictured above at Bishop Brian’s ordination at Church of the Ascension December 2, 2017.