Bishop Brian is pleased to announce that Brother Andrew Aelred will be joining our diocesan staff as Missioner for Communications and Evangelism on October 7.

Most recently, Andrew has been serving as Communications Coordinator and Associate Music Director at Church of the Ascension in Knoxville. Accomplished in communications and music, Andrew is also a natural leader.

At Church of the Ascension, he created and maintains the church website. He is responsible for social media, handles electronic communications, and created the entertaining and fun weekly Facebook live show called the “TEA” (Things & Events at Ascension) with cohort, GiGi Logan. Technologically well versed, Andrew serves as the church’s general IT troubleshooter. He is also a photographer for the church. 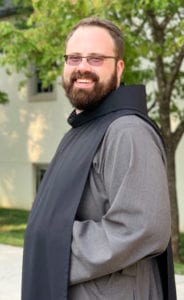 Andrew is a novice in The Ecumenical Order of Charity, a religious community whose members are called to be the living embodiment of three particular charisms: Charity, Availability, and Ecumenism.

In his off time, Andrew enjoys reading and studying in The Ecumenical Order of Charity. He enjoys working and gardening at his new home in Maryville and planning his wedding to fiancé Aaron in the spring. Andrew and Aaron both enjoy collecting works of art. Andrew also volunteers at Tyson House Episcopal Lutheran Ministry on the campus of the University of Tennessee, Knoxville, and at the Delaney Project in Knoxville.

Bishop Brian said, “I am so pleased that Andrew will be joining the diocesan staff. He brings great energy and a passion for The Episcopal Church and is gifted in helping us tell the story of following Jesus in an Episcopal context in the 21st century. He has been a blessing to the Church of the Ascension, Knoxville for several years and I am grateful to them for blessing this season as Andrew transitions to Diocesan staff.

“Vikki Myers has led our communications work through a crucial time in The Episcopal Church. She has taken us from the print age to the social media age and has taken many opportunities to travel throughout East Tennessee to help parish communicators tell the stories in their communities. She has not simply broadcast news from a static center. She has equipped the diocesan family both to tell and listen our best stories to each other. Andrew will build on a solid foundation of communication as evangelism and ministry because of Vikki’s work.”

Andrew said, “I am excited to work with the people, clergy, and churches of the Episcopal Church in East Tennessee as the Missioner for Communications and Evangelism. I look forward to our shared ministry together as we continue the great work begun by Vikki Myers and the communicators throughout the diocese. I am also immensely grateful for my time at Church of the Ascension, the people I’ve met there, and the skills I have learned.”

Andrew grew up in Lyman, South Carolina and moved to Knoxville in 2010. He was confirmed at Church of the Ascension in 2013. Andrew holds a bachelor’s degree from Presbyterian College in Clinton, South Carolina, in sacred music. He holds a master’s degree in music and organ performance from the University of Tennessee in Knoxville. He is active in the American Guild of Organists (AGO), most recently serving as district convener of the State of Tennessee.

Please join us in welcoming Andrew to his new role as Missioner for Communications and Evangelism!