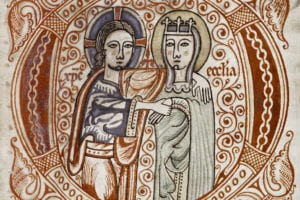 The man in the back of the room is very upset. He doesn’t think anyone believes the Bible anymore.

He keeps asking you about the little black book with the gold cross on the front. As he says these words, he continually sketches with his fingers in the air an image of a book with a large cross on it.

As he speaks, his voice gets more agitated.  As his volume increases, so does the frequency of his sketching of the image of the book with a gold cross on the front.

You don’t tell him that he reminds you of the street preacher who stood on the bridge that divided your college campus in two. While the college students made their way from dorms to classrooms, the street preacher was there most mornings, preaching without pulpit, in a preferred posture that involved him spending a lot of time balancing on the balls of his feet.

It was an odd posture that the preacher maintained during his daily sermons. Was he trying to peer over some object that only he, the righteous preacher, could see? Or was the Holy Spirit tugging him heavenward?

Unlike Father McKenzie from Eleanor Rigby, the street preacher had prepared a sermon that everyone would hear, whether we wanted to or not.

The basic theme of the sermon was this—we were in big trouble. I mean, just look around at all those college girls in those painters’ pants and fuzzy sweaters, with enough make up and add-a-beads to cause Jezebel to blush. Temptresses taking trigonometry, harlots on the meal plan.

The sermons were condemning without any invitation to repent. We were hopeless, we fornicators and drinkers of alcohol, with our cable television and Duran Duran. The semester had just begun, but the street preacher was there to announce that the Almighty was flunking us all.

He came to campus every day but the sermon never changed. He spoke as if he knew the Bible well, yet seemed only to find one message in the midst of all those words and the Word.

What would have been helpful to know about Bernard back then, while the street preacher condemned us without asking our names, were all those sermons he wrote about the Song of Solomon.

Bernard wrote 86 sermons about the Song of Solomon. When he wrote his first sermon about the Song, did Bernard realize, on that 12th century Saturday evening, that he would return to the Song again and again and discover 86 different ways to tell the story of the Song?

In much of the Old Testament, there is blood and strife, forgetting and exile, smoke and decay. In the Song of Solomon, however, there is an interlude from all struggle, there is a poem to love, to love that endures, that survives the winter and all the waters that cannot quench the fire of love. Within a sea of words given over to violence and pain and brokenness, the timeless Word puts down roots in the midst of Solomon’s song.

Like a thing you thought long lost and forgotten, you stumble across Solomon’s song hidden away in the things you keep because you think you need them but they are burdens, reminders of all the ways you do not measure up, the lies about yourself and God that others ask you to believe, because all they know of God is anger and condemnation, all they know of God is the street preacher on the bridge in Murray, Kentucky.

In the 12th century, imagine all those junior high boys and girls, making their way to church, to hear St. Bernard once again inform them that today’s sermon would come from Song of Solomon.

Those little French mystics with shiny new wooden play-pretties in their hands, those hands not properly washed, those hands caked with some kind of germ or grub that would soon unleash possibly a plague, a pox that would wipe out a village. But those hands, still made by God, those hands still held by mothers wondering when Bernard would run out of things to say about the Song.

If those children heeded the voice of Bernard, knowing they were the fair ones called by the Loving God, and arose and went away, then who would wash their hands? Would they still be loved with hands like that? Would they cry out to the lover calling them, “First, let me run back home and wash my hands!”

By the time Bernard died in 1153, his 86 sermons had only brought him up to the third chapter of Song of Solomon. 86 sermons on mystical love, yet most of the book remained unaddressed by Bernard’s sermons.

So a disciple of Bernard’s, a Cistercian monk named Gilbert of Hoyland, took up the project and wrote an additional 48 sermons on the Song of Solomon. At the time of Gilbert’s death in 1172, his sermons had reached into the fifth chapter of the Song of Solomon.

So, then another Cistercian, John, the abbot of Ford Abbey in Devon took up the project. By the time John died in 1214, he had completed a full commentary on the Song of Solomon. It only took him 120 more sermons.

So, those three monks, over nearly a century of time, wrote 254 sermons about the Song of Solomon, about the mystical love of God, about God’s unceasing love and desire for each child of God.

Yet, for many of us, it only takes one sermon of condemnation by one street preacher for us to believe that we have been cut off from God, that God chooses to condemn, that God has already rejected you.

Let us be clear. 254 sermons are a great deal more sermonizing than most Episcopalians can stand. Yet, you and I both know, if not in our own lives, then in the lives of others, of family and friends, those who have feel cut off from any sermons about God’s love, about God’s deep desire for us.

So, if need be, let us continue to write sermons about the Song of Solomon until the time when all sermons will cease. We all are kin to so many brothers and sisters who are locked in rooms of condemnation, already living as if dead in tombs of rejection.

The condemning winter is over. We know we have at least 254 ways to celebrate that Christ Jesus has made an eternal spring.

Image: Monk Thomas. Christ and Ecclesia from commentary on Song of Songs, from Art in the Christian Tradition, a project of the Vanderbilt Divinity Library, Nashville, TN. http://diglib.library.vanderbilt.edu/act-imagelink.pl?RC=56600. Original source: https://commons.wikimedia.org/wiki/File:KlosterEberbach_Hohenlied_Christus_und_Ecclesia.jpg